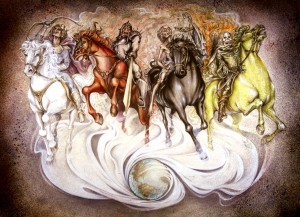 Check back for excerpt.

Pestilence, War, Famine, and Death are The Four Horsemen of the Apocalypse.  It’s a tough job, but someone’s gotta do it. Problem is, the youngest horseman, Death, hates her job, and makes a deal with the Archangel Michael for some vacation time so she can visit Earth for a bit.  Unbeknownst to her, the Archangels of the four winds want the Horsemen’s jobs, so they take advantage of the situation and banish all four of them to permanent human form.  The Four are dropped into a small, random town in Connecticut and placed inside bodies with pre-existing lives.

Benedict (Famine) is a geeky and overweight senior in high school, Raven (Death), the youngest at 16, is the typical, popular cheerleader with poor grades, Martina (War) is the 21 year old, oldest sister and a third year Philosophy major at Yale, and Nik (Pestilence) is in his early 40s, the single, hot dad Pediatrician.

They need to figure out how to get home, but in the meantime, they need to learn how to live as humans. 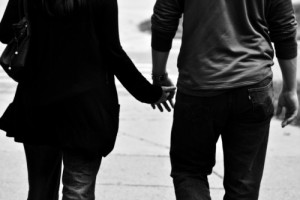 Rome Montaivo is your average college kid, trying to find himself in the great, big world..  When he starts to date a girl with completely different values from his own, he lets his immaturity get the better of him and compromises both of them, with disastrous consequences.  It’s a classic tale of how the choices we make can ruin even the best intentions, and how the folly of youth, when left to its own devices, can destroy lives.

THE PRICE OF LIFE 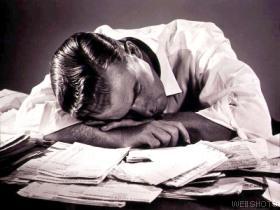 The Price of Life Excerpt

Frank Morgan is a middle-aged writer who loves his family and wants to do right by them, but suffers from a strange sleeping condition that places him in an un-rousable slumber for days at a time.  While his wife deals with the struggle of an absentee husband, a young daughter, and a conniving boss, the bonds that tie their family together are severely tested as they struggle to understand his condition.