Originally published on foxct.com on 5/4/15 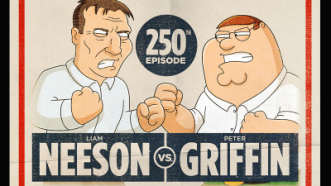 WATERBURY – If you watched ‘Family Guy’ last night, you might have noticed some very familiar things going on.  Fed up with Peter’s drunken insistence that he can beat up Liam Neeson, the gang drags him to Waterbury, Conn. where Neeson is filming a movie about a vengeance-seeking Albert Einstein (I’d watch that!).

Peter spends quite a bit of time traipsing around Waterbury trying to find a way to meet Neeson and challenge, finally ending up in jail after scaring Neeson’s bodyguards.  After learning Peter wants to beat him up, Neeson bails Peter out of jail.

In effort to avoid Neeson’s fists of fury, Peter agrees to act as an indentured servant to Neeson for the time being, commencing a series of humiliating tasks which Neeson has him do.

It concludes with Peter finally deciding he’s had enough humiliation and choosing to fight back. The duo immediately engage in a Giant Chicken-styled fight, except Peter is unable to land a single punch on Neeson. It’s quite embarrassing for Peter, actually.  He gets his butt kicked.

Intrigued? If you missed the episode last night, you can watch the full episode on either FOX or Hulu!